A Trilogy by Edward St. Aubyn 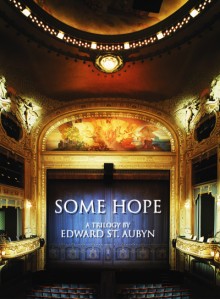 This title was originally published in the U.S. by Open City Books, but we no longer publish or sell it.

Some Hope marks the U.S. debut of Edward St. Aubyn, highly acclaimed in the U.K. as one of the most original, intelligent, and acerbically witty voices of our time. From Provence to New York to Gloucestershire, through the savageries of a childhood with a tyrannical father and an alcoholic mother, to a young adulthood fraught with drug addiction, we follow Patrick Melrose’s search for redemption amidst a crowd of glittering social dragonflies whose vapidity is the subject of his most stinging and memorable barbs. A story of abuse, addiction, and recovery, the trilogy is a haunting yet hilarious depiction of a journey to and from the farthest limits of the human experience.

"St. Aubyn's first novel carries a biting subtextual social criticism reminiscent of The Corrections, but this British writer takes no prisoners. His brilliantly wrought fictional trilogy features a character-driven narrative with flashes of conflict and emotion relieved by a stringent humor. Some Hope is the tumultuous journey of Patrick Melrose, following along as he endures an abusive childhood under the tyranny of a deliberately cruel father and a drunken mother, through resulting addiction, dereliction, and bitterness that threaten to overtake him completely. On Patrick's travels, readers meet a great many social climbers determined to avoid the label "working class," who provide cautionary evidence for a life of greater significance. From detestably vapid socialites to the loathsome elder Melrose, St. Aubyn's characters are exquisitely rendered and revealed bit by bit in precise sections, like subjects of a biology class. But St. Aubyn is after something deeper, exploring the contrasts between perception and reality, surface and substance. His protagonist has the urgency of an addict searching for order in a chaotic universe, for significance in a vast nullity. Ultimately, Some Hope offers what the title suggests—a powerfully satisfying conclusion and the reconciliation between the quest for forgiveness and redemption, marking St. Aubyn as a truly important literary discovery."
— From Barnes & Noble Discover Great New Writers, Winter/Spring 2004 Selection

"Enough of the likable heroes, the ordinary folks, the quirky losers. What contemporary literature needs is a really good misanthrope, a black-hearted cad. In Some Hope, British novelist Edward St. Aubyn creates a spectacularly toxic confection in David Melrose, an aristocrat whose pedigree stretches back to Charles II and whose primary activity is brutality. On the book's first page, he wantonly drowns ants with his hose, allowing the survivors to 'regain their dignity for a while, before bringing the thundering water down on them'—and he treats humans no better. His cruelty is exquisitely calculated, applied to almost anyone who wanders too close, whether it's the maid, his wife, or his son, Patrick."
— The Village Voice

"Edward St. Aubyn's three short novels are hilarious and harrowing by turns, sophisticated, reflective, and brooding. When the books first appeared, critics in England compared them to the works of Evelyn Waugh. To me they seem in some parts both funnier and sadder, which is saying a lot. Like Waugh's novels, they are set amont the English upper classes, but whereas Waugh loved toffs (even if he somtimes made fun of them) St. Aubyn loathes them, and mocks them relentlessly and with venomous wit. His sociological and psychological insight is penetrating, especially where two categories overlap. The dialogue is brilliant too, with every character speaking and thinking in his or her own idiom. Metaphors explode like rockets to illuminate meaning, and only very rarely detonate just a little over the top. "
— The New York Review of Books

"A masterpiece. Edward S.t Aubyn is a writer of immense gifts. His wit, his profound intelligence, and his exquisite control of a story that rapidly descends to the lower depths before somehow painfully rising again—all go to distinguish the trilogy as fiction of a truly rare and extraordinary quality."
— Patrick McGrath

"Drugs, deliberate cruelty, withering snobbism—these are just some of the vices of David Melrose, one of the great villains of contemporary literature. His malign effect on his son Patrick is traced out not over vast summarized periods of time but in tight, funny scenes set at strategic points in the boy's difficult destiny. Edward St. Aubyn can write dialogue as amusing as Waugh's and narrative even more deft than Graham Greene's, since St. Aubyn switches quickly from one point of view to another and even to several more while never occluding the lucidity of his disturbing design. This is a long overdue debut on these shores."
— Edmund White

"Speedballs, incest, and royalty are just a few of things that make Some Hope exquisitely harrowing entertainment. Beyond the high-born squalor, though, is a saga of genuine wit and heartache."
— Sam Lipsyte

"Powerful. . . elegantly organized and very funny . . . Like everyone else, Edward St. Aubyn writes about what he knows—childhood, sex, parties, dealt with life among the unpleasantly rich, tracing the unsteady progress of Patrick Melrose from traumatized childhood through bitter years of drug addiction."
— Independent on Sunday

"This is beautifully written novel . . .whose harrowing but fiercely funny portrait of addiction is the best I've ever read."
— Time Out London

"A gruesome, and often gruesomely funny, study of the minor aristocracy at play. . .These are the feckless aristos of A Handful of Dust updated, and with a few added taboos cast aside."
— The Literary Review

This title is no longer published or sold by Open City Books.