A Novel by Steve Tesich
$$ / Order 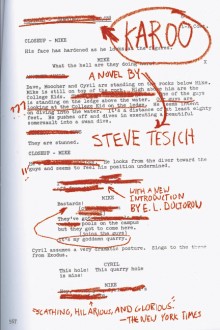 with a new introduction by
E. L. Doctorow

Saul Karoo thinks. But understanding eludes. He lusts. And sometimes with success. He drinks. But he cannot get drunk. Karoo is a professional fixer of other people’s scripts and, by his own acknowledgment, he ruins them all.

Calamity and comedy follow shambolic Saul Karoo as his life breaks down. But he is not without resources, namely his wit, his ex-wife, and his irrepressible soul, which in its own way is reminiscent of another bighearted broken man of literature: Saul Bellow’s Herzog. Finally, he is a man prone to luck both bad and good, and when a young woman with a strange connection to his past shows up, the plot of his own life comes into sharp focus. Steve Tesich has grounded his story in the highly recognizable world of New York in the late 1980s, a milieu of unscrupulous producers from the West Coast, dry cleaners, divorce, and fantasies of escape. Karoo is a haunting, highly human, deliciously realistic novel of decline, fall, and rejuvenation.

“Early in this hilarious novel, readers will be laughing out loud, but Tesich is ultimately quite serious about reminding us that moments or years of ‘unlove’ can never be set right.”
— Publishers Weekly (starred)

“Tesich creates a memorable monster . . . His writing is, as usual, enticing, sharp, and observant . . . Not to be missed.”
— Library Journal (starred)

“Saul Karoo is a new kind of wild man, the sane maniac. Larger than life and all too human, his out-of-control odyssey through sex, death, and show business is extreme, and so is the pleasure of reading it. Steve Tesich created a fabulously Gargantuan comic character.”
— Michael Herr

Steve Tesich wrote many plays and screenplays, including the Academy Award–winning Breaking Away and The World According to Garp. His first novel, Summer Crossing, was published in 1982. He died in 1996 at the age of fifty-three.

KAROO (excerpt)
A novel by Steve Tesich
with a new introduction by E. L. Doctorow