Warning: Use of undefined constant ddsg_language - assumed 'ddsg_language' (this will throw an Error in a future version of PHP) in /home/customer/www/opencity.org/public_html/wp-content/plugins/sitemap-generator/sitemap-generator.php on line 44
 Actual Air | Open City 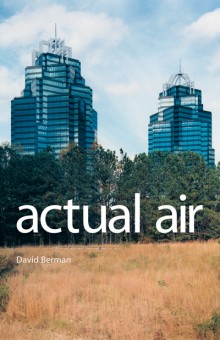 This title was originally published by Open City Books, but we no longer publish or sell it.

Actual Air, the first release from Open City Books, is David Berman's highly anticipated debut poetry collection. In these vivid and subtly radical poems, Berman, frontman for the popular indie rock band, the Silver Jews, reinvents overlooked details of everyday life- from the suitcase of a departing girlfriend to a baseboard electrical outlet. He charts a course through his own highly original American dreamscape in language that is fresh, accessible, and remarkably precise. His arresting and insightful take on contemporary life will appeal both to readers of poetry and to fans of cutting-edge, thought-provoking rock and roll.

"David Berman's poems are beautiful, strange, intelligent, and funny. They are narratives that freeze life in impossible contortions. They take the familiar and make it new, so new the reader is stunned and will not soon forget. I found much to savor on every page of Actual Air. It's a book for everyone."
— James Tate

"This is the voice I have been waiting so long to hear... Any reader who tunes in to his snappy, offbeat meditations is in for a steady infusion of surprises and delights."
— Billy Collins

"David Berman is a young Virginian poet with a sly, intense regard for the past. He comes on like a prankster, restocking the imperial orations of Wallace Stevens and the byzantine monologues of John Ashbery with the pop-cultural bric-a-brac of a new generation: 'I am not a cub scout seduced by Iron Maiden's mirror worlds.' But his words have an easy, eloquent gait; each line needs to be a line. The landscapes are crisply American, and history, especially Southern history, casts a shadow. A poem about Lincoln ends, 'The assassin was in mid-air / when the stagehands wheeled out clouds.'
— The New Yorker

"One of the funniest, smartest, and sweetest books of the year, a collection of snapshots colored ecstatically outside the lines. This is the absurd American sublime, poetry that raises the stakes on the every day and bluffs the bluffers."
— GQ

"In Berman's universe, time slips lazily on by, life is thoroughly strange and perpetually interesting, and there's no reason why a man shouldn't sit down on a Thursday afternoon in May and learn some new facts about animals."
— Time Out New York

"When was the last time you picked up a volume of poetry and found yourself hanging on every word, reading it all the way through in a single setting and then going back to the beginning? This first collection from Berman is that kind of book. Full of casually sharp observations about the most mundane subjects. Air is funny, weird, and profound, whether it's tackling the nature of hallways or the architecture of back pain."
— Entertainment Weekly

"Actual Air is actual poetry. Berman is on a mission to make the world strange, to find in the doo-dads of daily life a profound weirdness . . . which makes for a rarity in contemporary poetry."
— Spin

David Berman was born in Williamsburg, Virginia in 1967. He graduated from the Greenhill School in Addison, Texas, the University of Virginia, and the University of Massachusetts. His band, the Silver Jews, has released four albums, The Natural Bridge, Starlite Walker, American Water, and Bright Flight, on Drag City Records. He resides in Nashville, Tennessee.